skip to main | skip to sidebar

Alright, so. Yesterday? We basically went to a park all day for Oriane's birthday.
Almost all of the French/American kids were there. Well, not all of them--but a good number of them.
Some of the French kids were sad because one of their friends died, and another was in a coma? Something like that. I never got the full story, and honestly, it would have been rude to ask. So they all sorta sat around together, talking in French, while the American kids did the same (but in English, of course).
Some of the kids left, and Oriane's dad brought pizza, chips, these little eclair-like balls, and drinks to the park for those who stayed.

By the time we left the park, I was ready to leave.
It was cold, I was tired, and after awhile, the park just gets straight up BORING.
Most of us were ready to leave, though.
Logan, Lea, Antoine, Erin, Oriane and I all left at the same time.
Courtney, Keith, and Joe had to stay behind because their French kids wanted to stay.
But really, I think it was about time for everyone to leave, anyways.
Posted by Morgan at 2:00 AM No comments:

Okay, so: I think I messed up the days. I think yesterday was day 13, and Wednesday (Europa Park) was day 12. I have no idea.

ANYWAYS.
Yesterdayyy was pretty cool.
We went to some old village where people showed us how they made traditional pottery from the village.
Then we went to this park thing for like, an hour. Honestly? I was totally glad we did. Everyone needed a little time to just chill and like, breathe, I guess. Everyone threw their towels down on the ground and just layed around, hahaha. I just layed in the grass, took a few pictures of flowers, listened to my iPod with Ryan, and straight up CHILLED. It was great.
After that, we went to the Roman Bath-house thing. I gotta be honest, it was pretty beast. I mean, I could have done without the old men in speedos, but other than that, it was awesome. I fell asleep outside with Kate and Sarah tanning, until Ryan came and shook our chairs to wake us up because we had to leave. ...And I was sleeping good, too, dang it!
We left the bath-house to go back to the dance party (yes, dance PARTY. This was no school dance, man.) that the school was having for all the French and American kids. All I have to say is: wow. I swear, the whole crypt thing where they had the dance party at, looked (literally) like a club. Neon flashing lights, a DJ, crazy techno music, ect. All I know is, I wish Ashley had dances like that!
The dance party was pretty cool. Everyone basically dance their butts off, until the stereo broke. So then a whole group of about 10 of us started singing songs so we could dance, until they fixed the stereo. Then we danced more, chilled, went home, and ate peanut butter sandwiches.
So all in all, yesterday was good.
Posted by Morgan at 3:21 AM No comments:

Today was pretty beast, I gotta be honest.
Europa was amazing, the rides were great, and I DIDN'T CHICKEN OUT.
That's right. I rode the bigger stuff WITHOUT people begging/bribing me to. I was pretty proud of myself, to be 100% honest.
The best? Silver Star and Blue Flame.
Blue Flame is Europa Park's newest ride, and it's INCREDIBLE. I wish I had a picture of it, but I'm sure someone does, so just check around on the blogs.
I also enjoyed sprinting all the way to the Silver Star, jumping all of the barricades, and sprinting through the line with the last group of kids I was with. That was pretty epic.
So anyways, the park was basically one of the best days here in France so far.
The busride back was pretty nice, too. Ryan and I jammed out to his iPod, and made up an improv dance to "Hot N' Cold" by Katy Perry.
Yeah, I know. I'd be jealous of our mad dance skills, too. We ARE pretty awesome.

Anyways, I'm tired.
Erin is laying here playing that game on her iPod again, which means she's tired, too.
She still can't figure out her blog, even after Oriane and I both tried to help her. I don't know what's up with Blogger; It's just being too complicated for the 3 of us right now.
So anyways, goodnight.
I'll post some huge blog with pictures later.
When I'm not tired.
And actually feel like doing it.

Peace Out.
Posted by Morgan at 1:24 PM No comments:

Yesterday: Paris, France.
Pretty ballin', if I do say so myself.
The Eiffel Tower was... tall. And we had to WALK down to the bottom.
Not such a great thing when you're scared of heights.
But the rest was pretty great.
Ryan and I decided to have lunch on the Eiffel Tower instead of at the park.
Just to say we ate on the Eiffel Tower.
We took pictures for proof, they're pretty funny.
But yeah.
The Louvre, or however you spell it, was.
Well.
Sorta over-rated-ish. I mean, sure.
It has the Mona Lisa.
But it was also about 3984739287 degrees inside the building,
the picture is small,
and there are about 89347398473 people crowding around it to see it.
I mean, the Louvre was pretty cool for the first 45 minutes.
Then the tour guide kinda started to bore me, so yeah.

The highlight of my Paris trip?
Free time, running around underneath the Eiffel Tower, eating icecream, and trying not to get any in my hair.
...Hahahaha.

Today:
Bowling with the frenchies.
I was prettyyyyy tired, so that didn't go too well.
4 frames and 2 pins into the game, I decided to quit.
So I just kinda chilled.

About 20somthing kids, French and American, decided to go to McDonalds in Downtown Strasbourg for lunch today.
1) never in my life have I seen THAT many people in a McDonalds at one time.
2) they sell beer at McDonalds in Strasbourg. Who knew?!
3) that was possibly THE best McDonalds I have ever tasted in my life.

After not eating anything relatively American for roughly a week and a half, McDonalds was exactly what everyone needed.

We had free time after that.
The French kids told all of us to stay at the school and not to leave, while they sat in class for an hour.
...Well, I guess we skipped school in France, then.
Shopping >>>>> Sitting at school for an hour.
Me, Ryan, Keith, Erin, Jessica, and Sarah all left campus to go get a little shopping done. I mean, we weren't the only one's who left. Basically everyone but like, 3 kids left. Even the teachers ditched.
I don't think the French kids knew anyone left, though. They told us they'd be out of class at 3, so everyone rushed to be back on school grounds by 2:55.
I mean, we're not little kids. We can find our way around Strasbourg.

Afterwards, was the European Parliament.
...I fell asleep.
So I don't really know what happened there.
Posted by Morgan at 12:56 PM No comments:

Oh. My. God.
My feet ache. My legs ache. I can barely keep my eyes open.
But today was pretty freakin' awesome.
Oriane, Erin, Keith, Joe, Niccolas and I all went hiking up some mountian, while both sets of parents tagged along with us.
Keke said the trip was about 10km altogether. Which translates to about 6.2something miles.
The views were absolutely MAGNIFICENT. We hiked up some whole mountian, up rocks, slid down paths, found some old castle thing and climbed to the top... yeah. It was pretty awesome. Until Joe tried to kill me by dropping a huge rock down the stairwell I was climbing. Everyone threatened to push him off the mountian, but since I lived through the horrific event, Joe is still alive, too. We compromised. I live, he lives. Seems fair enough, right?
I'll post some of the pictures from the trip some other time, when I'm not aching and about to fall asleep.
...Hah, yeah. I'm definitely gonna feel this tomorrow when I'm in Paris.
SPEAKING OF WHICH.
4:45am, rise and shine.
God. Imma sleep on the train, I'm sure.
Anyways, Erin just got out of the shower, so it's my turn.
Au Revoir! (Excuse me if I spelt that wrong.)
Posted by Morgan at 9:45 AM No comments:

There are like, 398457329854 cops everywhere. And riots.
But we're pretty much safe from all of that.
So. Don't panic, mmk?
Obama is gone, and the cops are keeping the riots under control.
Most are just on the French/German border, anyways.
Which is a little ways away from where I am staying.
So, I'm safe. 17,000 cops is enough to keep me safe, I do believe.

P.S. -- MOM. DAD. Yeah, you're basically never on Skype when I am, because I can never be on at the same times as you. Things change on a daily basis here, SORRY! The internet is whacked out, due to crap from the NATO riots, ect. At least that's what my host family has been telling me. With all of the chaos between the NATO riots, and the Obama stuff, internet, TV, and phone have all been a little whack. There are cops, and helicopters basically everywhere, and you hear sirens every 3 minutes from cops patrolling the city. So, don't worry. I'm good. OH! And go to wwayTV3 website. They did a report on the Cape Fear Global Club trip. Check it out.

Peace.
Posted by Morgan at 2:32 PM No comments:

Alright, so. I was really tired last night. And didn't really feel like doing my blog, because sleep seemed much, much more appealing than blogging.
...Sorry, I'm just being honest.
ANYWAYS.
Yesterday, both the French and American alike went to this HUGE convention thing, to meet president Barack Obama.
Kinda ironic, meeting the United States president in France. But. That's just life for ya.
We had to wait FOREVER to get into the room where Obama made his speech, some of which I didn't understand, due to the fact I can't multitask (take pictures and listen at the same time). SO! Yeah.
Ryan waited an hour in line to get a Coke for me, which I thought was hilarious. I felt bad, but. Ohwell. They took the caps off the Coke bottles so that nobody would try to flick them at the prez. Just a little bit of info there, for those who didn't know.
Afterwards, Erin, Oriane and I all went over to Helene's house with Hanna, where we played Uno, gossiped, and watched ourselves on the news, online. WWAYTV3. Go check it out, we're still online, I think.

BUT YEAH. Imma post more pictures, since Oriane, Erin and I are about to leave. 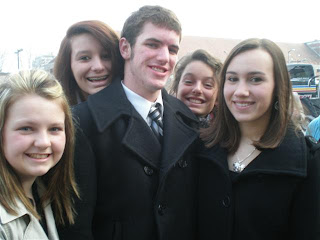 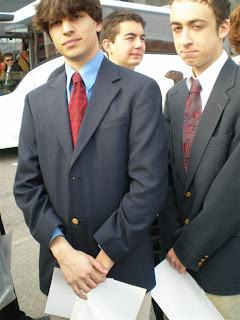 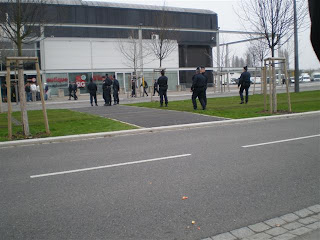 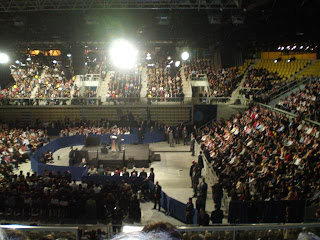 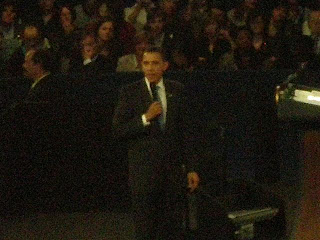 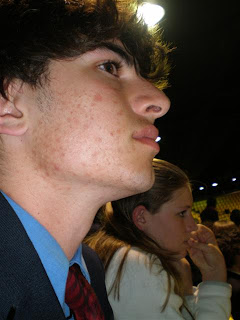